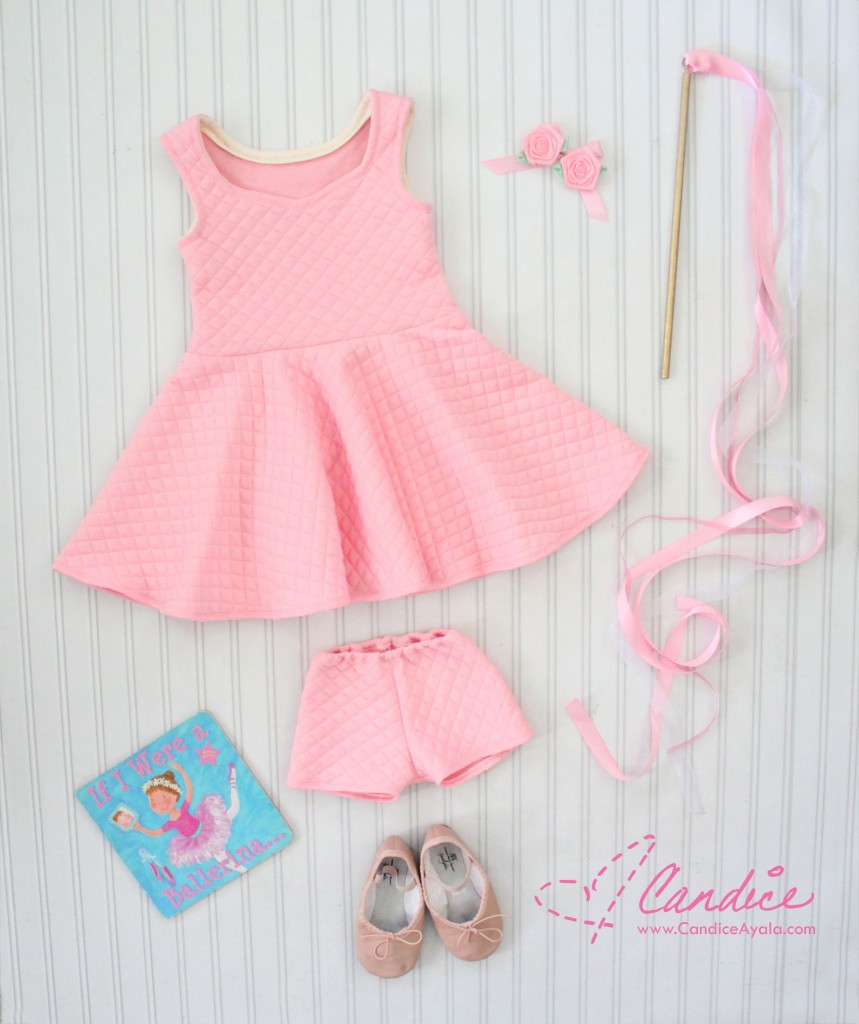 Not sure if you noticed, but I took the week off from blogging. Even though that really just meant pressing “Publish” on an already written blog, sharing it across all my social media platforms and taking the time to respond to comments can take up a lot of time, so I decided to take a break from all of that this week to focus on some birthday sewing and other projects in the works . It really was a good mental break, which was a great thing in hindsight, because I needed a clear mind and plenty of patience for this “Perfectly Perfect Pink Birthday Dress” request.

I made the mistake of mentioning to Abigail that she had Dance & Tap class on the day of her Birthday, two days before the day, and what do 3 year old’s do the very best?? THEY ARE SUPER GOOD AT CHANGING THEIR MINDS (with no regret or consideration for anyone else hahaha). So she decided she NEEDED a dress for dance class, and “nevermind” on the dress I was already working on…..*womp womp womp* Normally, I’d just carry on and try and figure out a way to convince her to like the first dress, but you know, it was HER birthday, what’s a mother to do? We went through my fabrics and I took out this gorgeous piece of quilted pink knit (purchased from Fabric.com and still in the plastic packaging mind you) and set it aside, because I really didn’t consider it an option for her, lol – well, I was wrong. Do you know what 3 year olds do the second best? They pick the things they know you don’t want them to pick! So she picked the quilting knit, and despite my many tries to dissuade her, she insisted –  “Mom, its the perfectly perfect birthday pink! I love it!”  – I mean, can you really argue with that? lol

She wanted something twirly of course, so I decided the bottom had to be a circle skirt and I used the super genius Circle Skirt App by Hand London to take the headache out of figuring those measurements! (Definitely bookmark this app! I did a “midi” and “full”) The initial birthday idea was princess themed, so I decided to go with sweetheart neckline and used the same template I made for her First Day of Spring Dress but this time, I drafted the straps a little differently. In my head I thought this would be an easy process ….but nope. I attempted to line the bodice for my first attempt but it ended up being too bulky (why did I ever think that would work? Especially since the knit is quilted?) 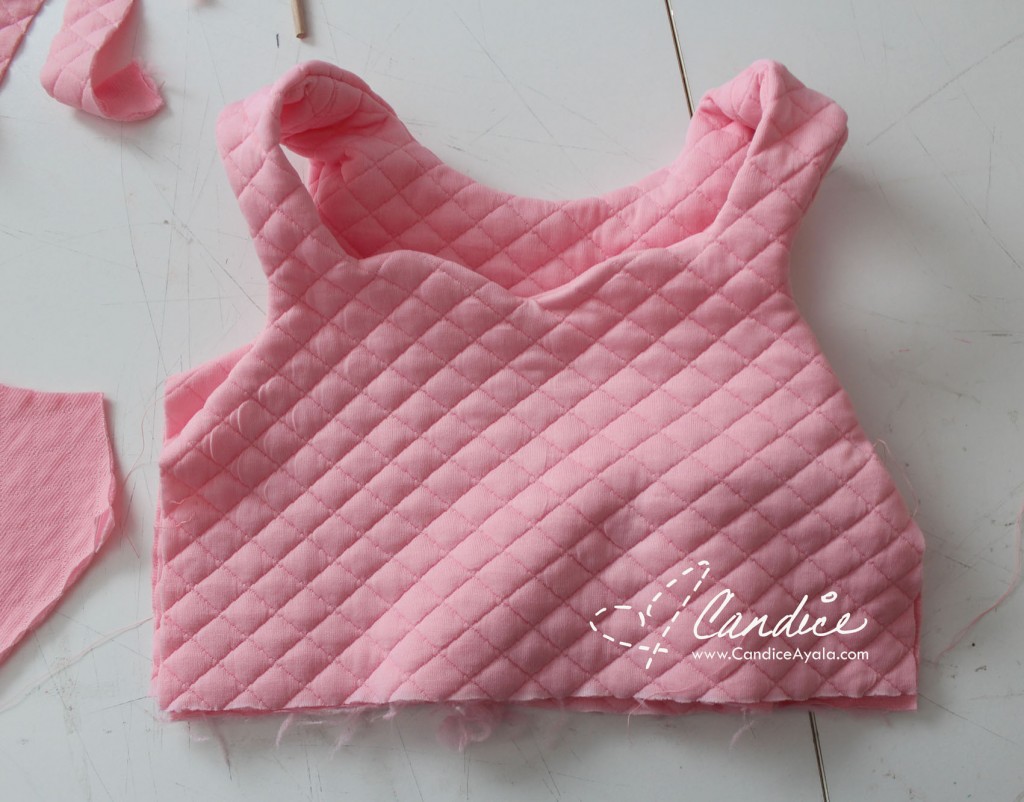 My OCD was stuck on lining the bodice for some reason, so I tried using a different weight knit, …..seriously, what was I thinking?!? 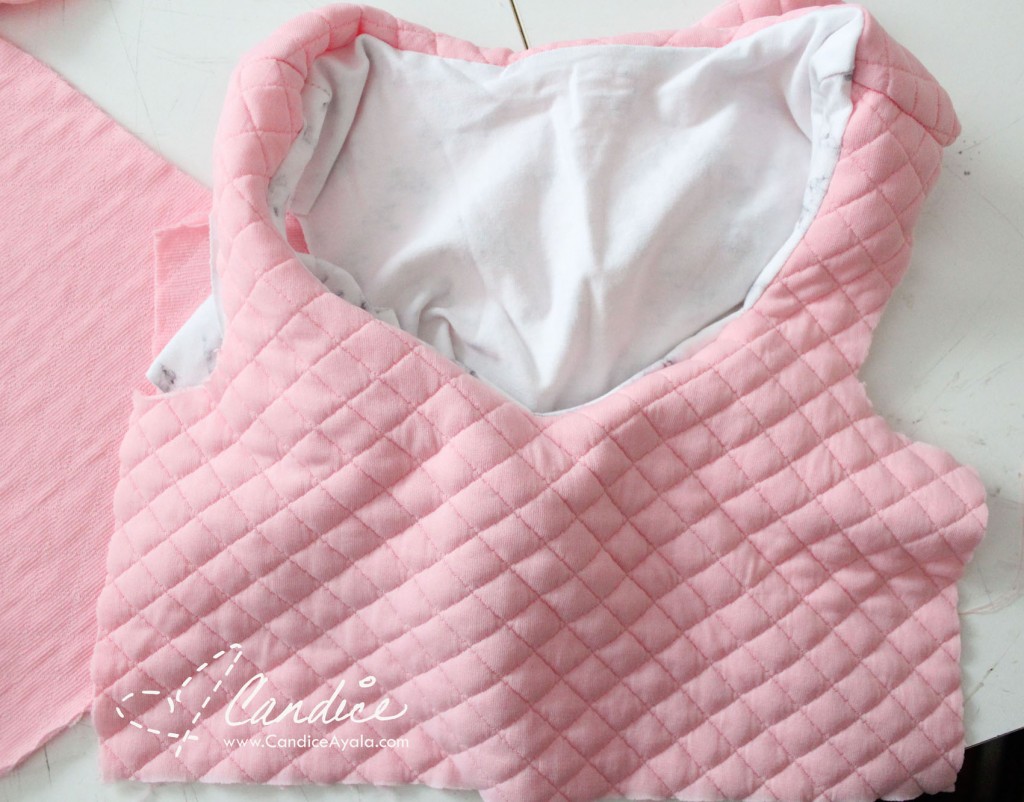 I still wasn’t giving me the look I wanted, but I was running out of fabric, and patience and comfort chocolate and my only other alternative was using knit bias tape, so I went with that. The only knit bias tape I had was a cream color, so I decided to use it as a facing instead, and despite my OCD throwing a tantrum, it came out pretty good! 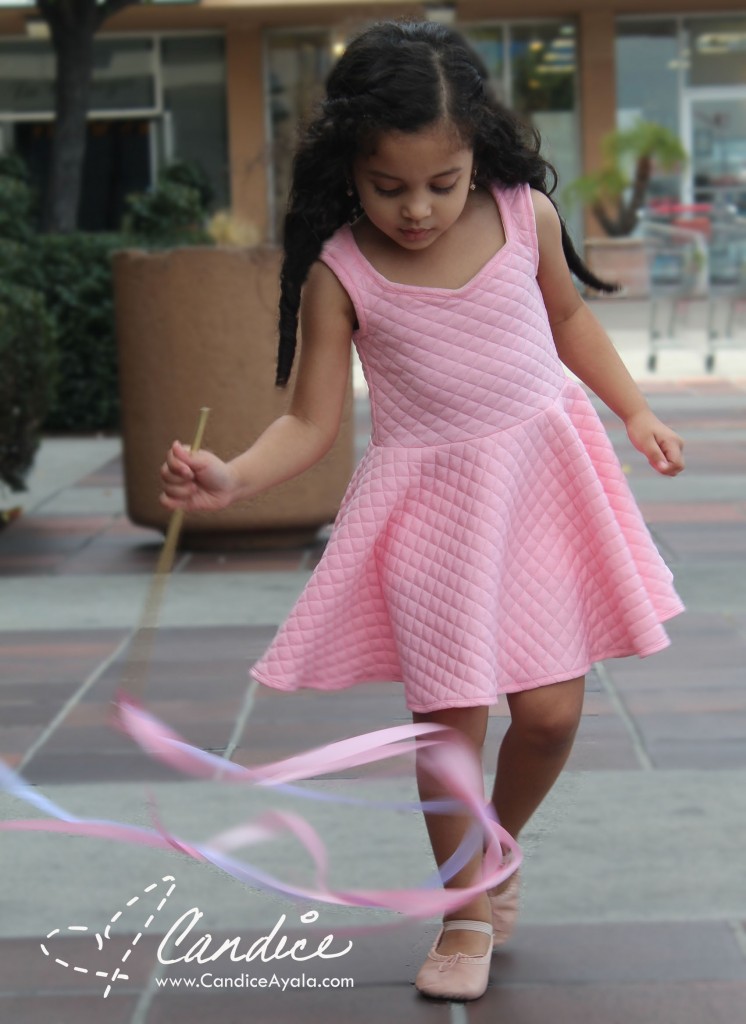 She was pretty excited about wearing her Perfectly Perfect Pink Birthday Dress to class! But enough of my yapping, let’s get to the action pics! We went to class a little early so we could get some good pics in, and she enjoyed having the studio to herself. 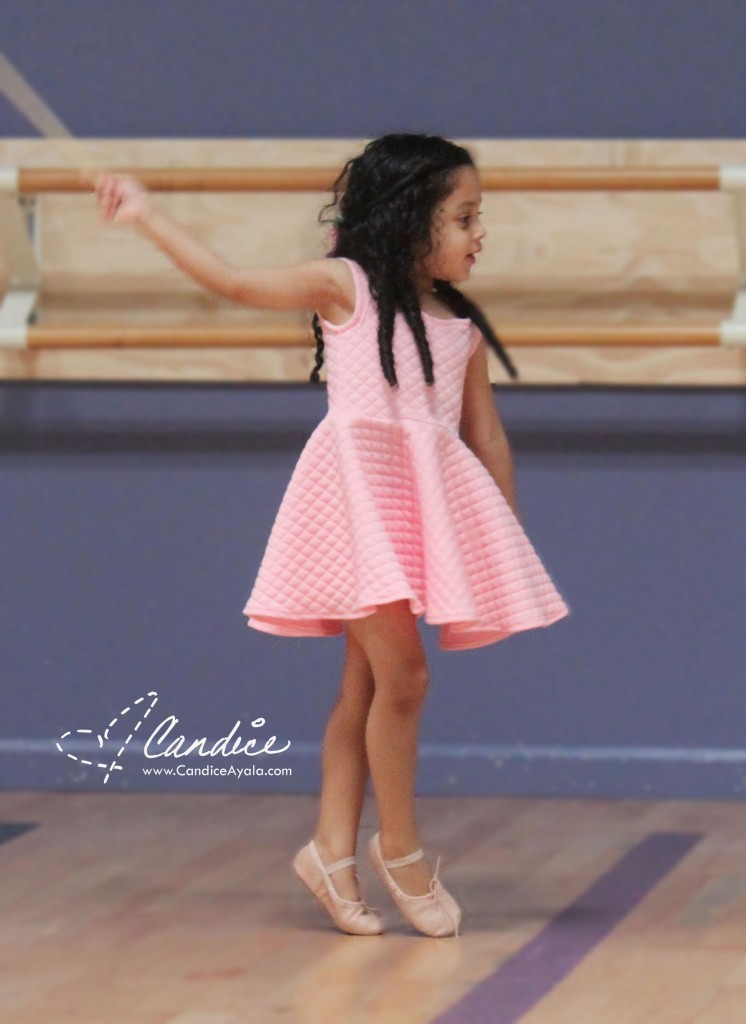 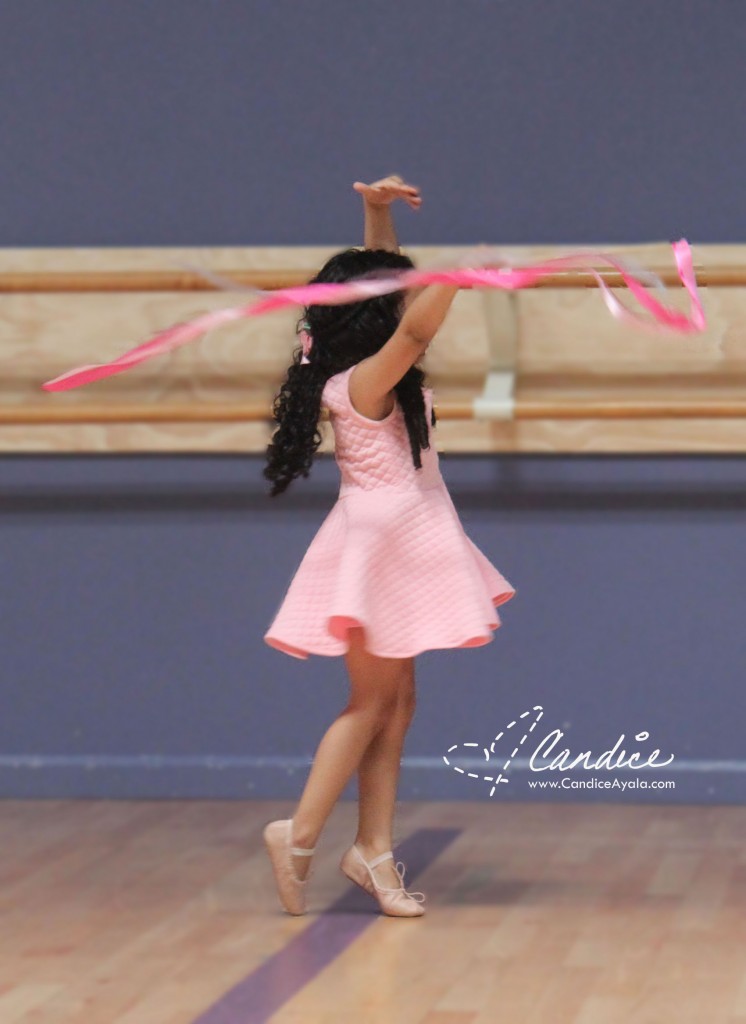 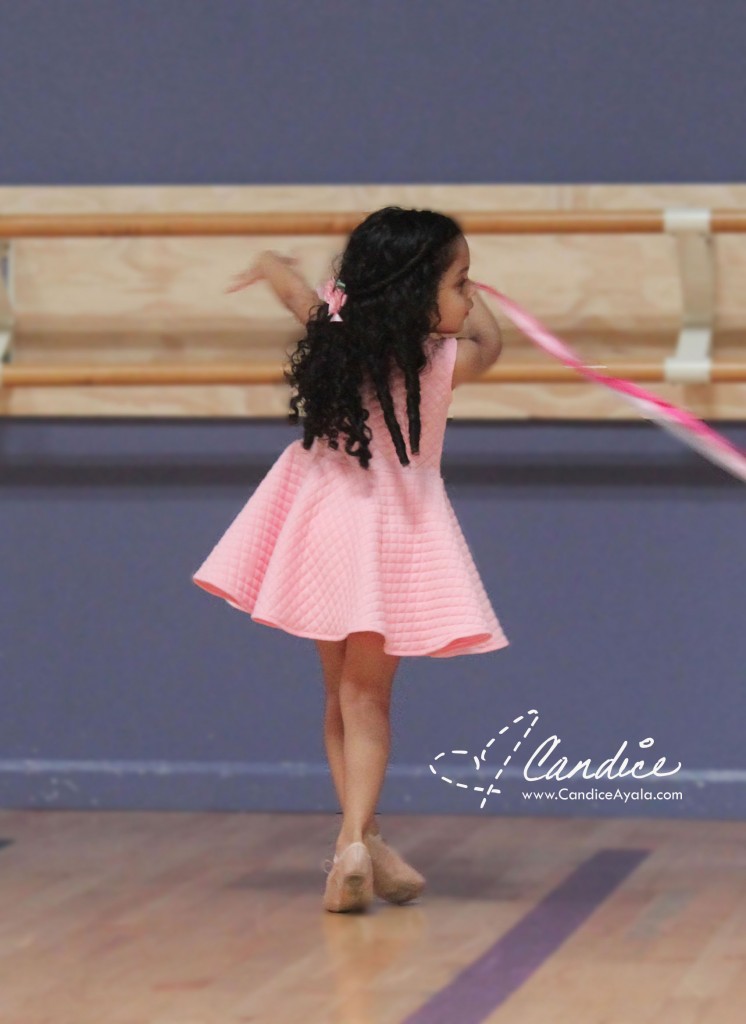 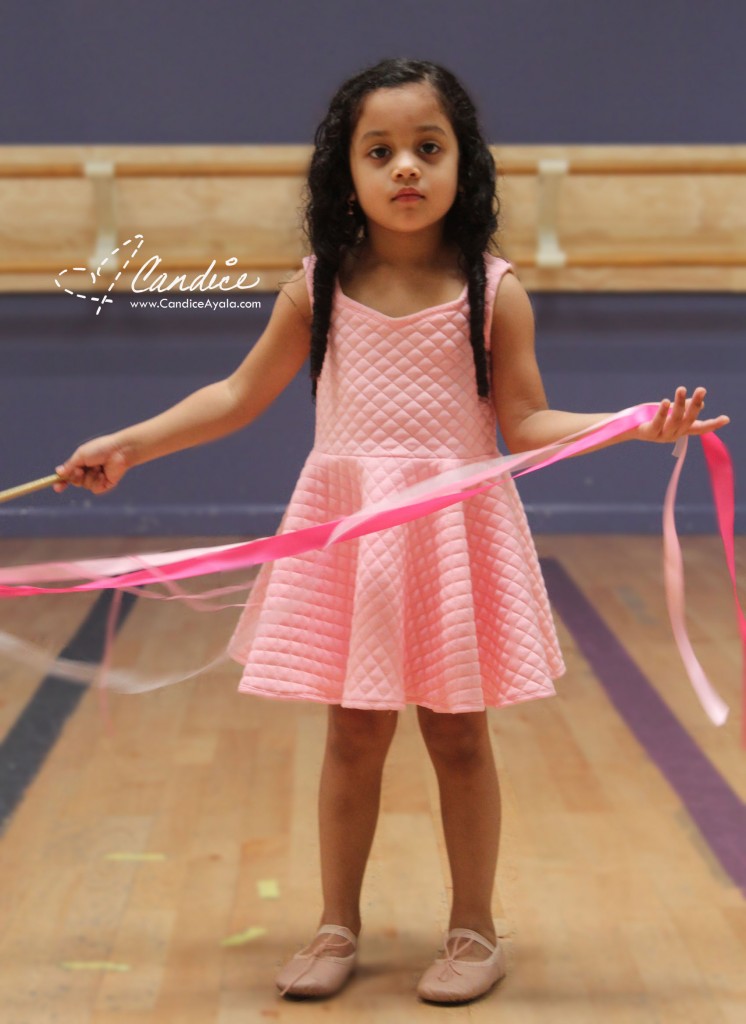 In my head, I thought she would just wear her usual ballet leggings, but I realized that they were a different shade of pink after, so I decided to use what little fabric I had left over to sew up some modesty shorts to go under the dress. 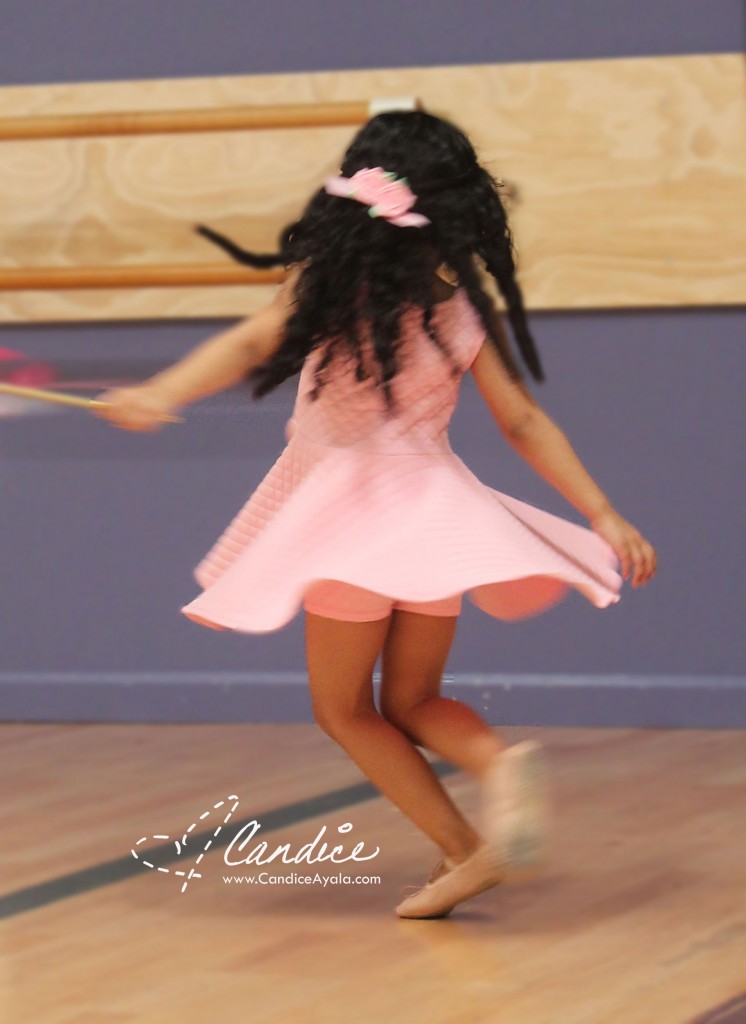 The dress has some mega twirl factor, so those modesty shorts were a must! haha. 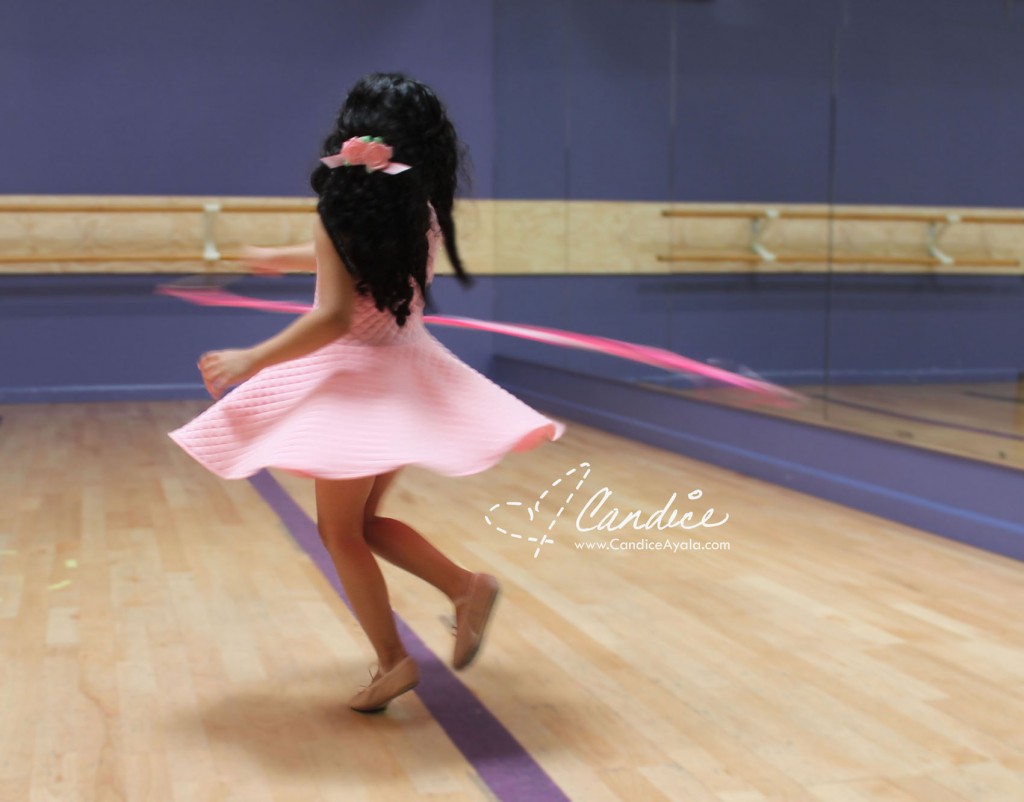 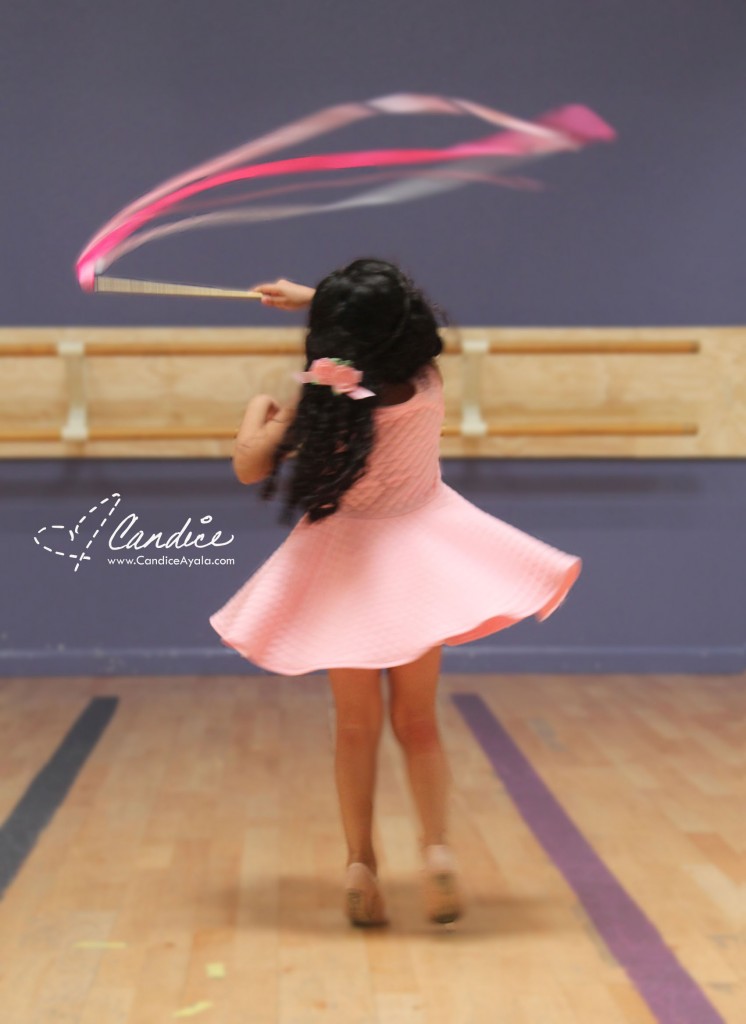 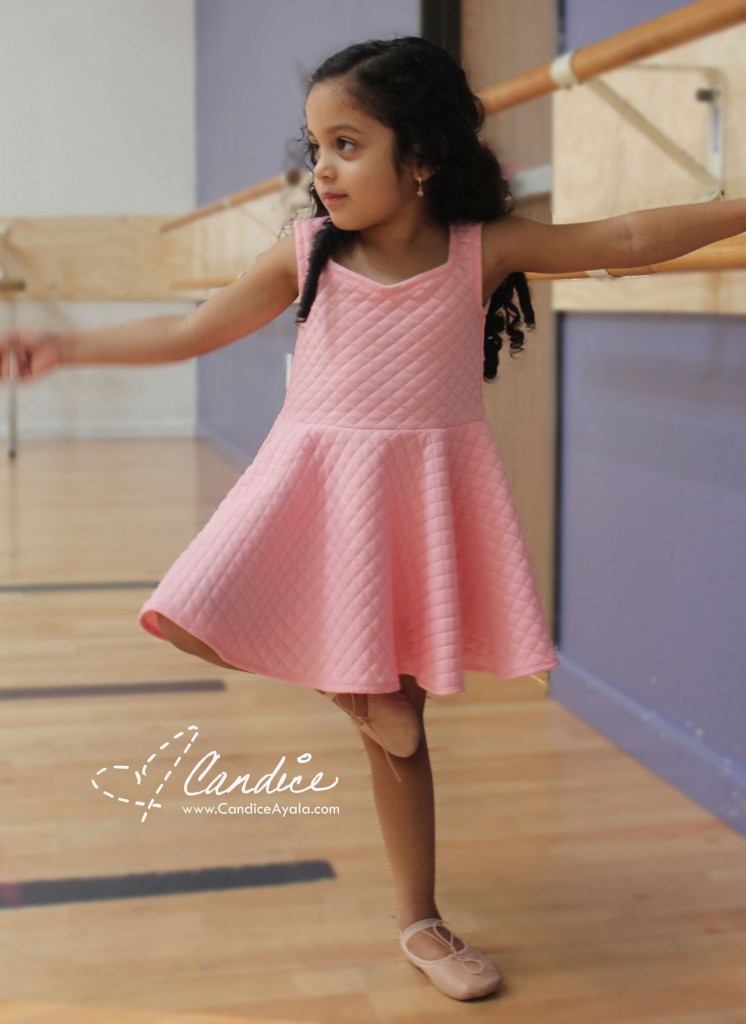 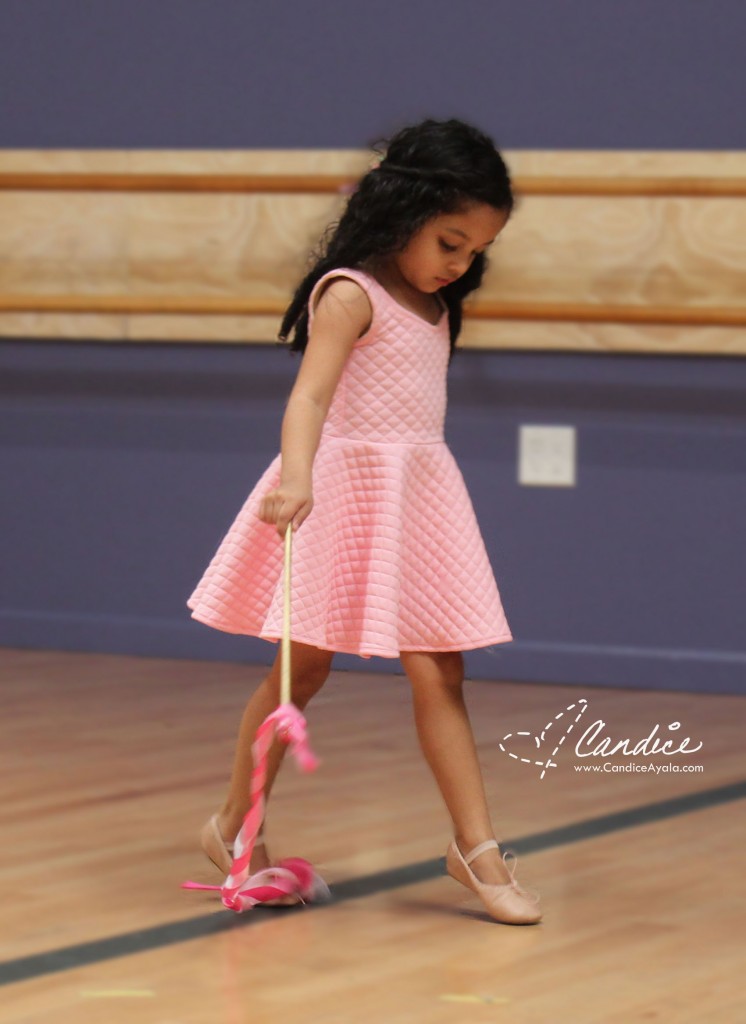 Believe it or not, I didn’t have to ask for any of these poses, she loves dance class and was really in her element here. Sometimes it doesn’t even look like she’s having fun because she takes it so seriously! It’s so lovely to watch her. Her teacher is pretty awesome, and her class mates are super sweet and adorable, I think we’ll be doing dance for a long time.

The rest of the day consisted of doing some of her favorite things, and then we went to the grandparents for dinner. And of course her Grandma A made the perfect cake to match her ballerina themed day! 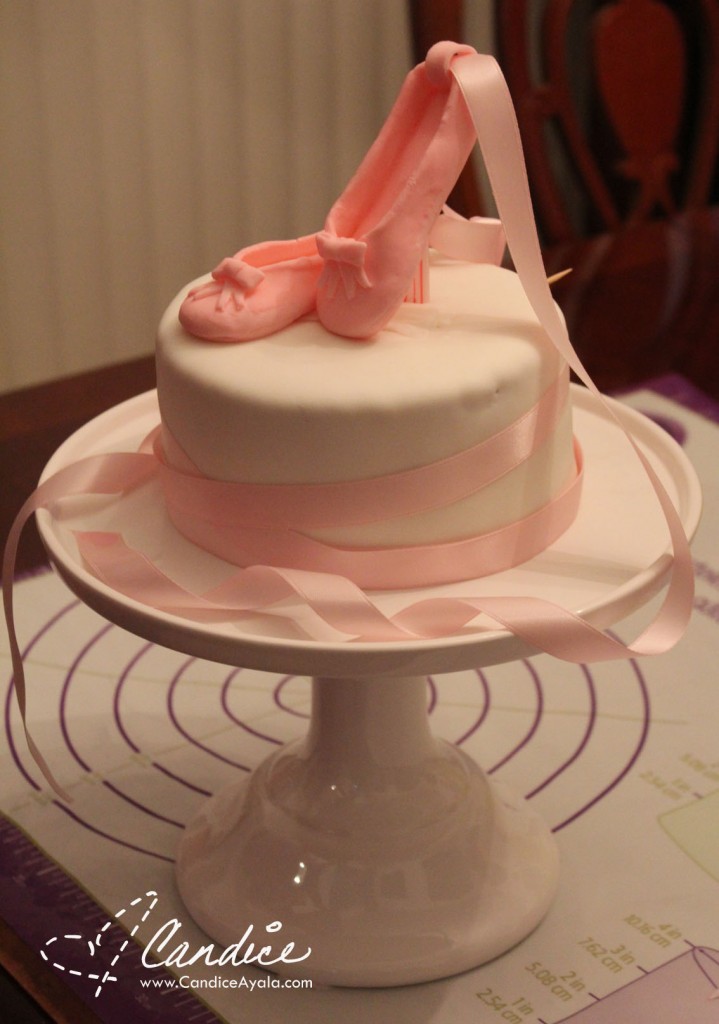 And that’s it for today guys! Thank you so much for stopping by. Oh! She did have one more birthday outfit, but that one’s coming in a different blog post. So until then, I’ll talk to you soon! xoxo 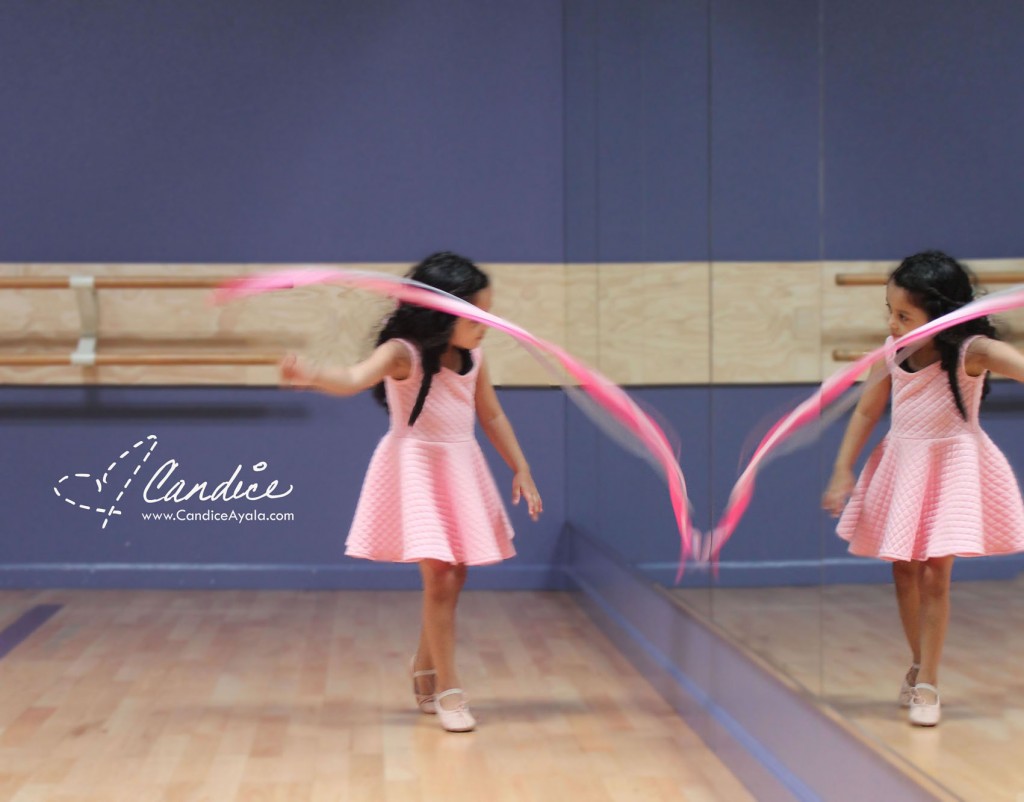